We had two wonderful Carol Services last Sunday, due to a number of talented musicians and lesson readers. Many thanks to all involved including the church decorators

Please let Richard know if House Communions or any visiting is required over the holiday period.

All good wishes for the season

Please note the change of service pattern for Sunday 20th December. There is no morning service at Aberfoyle and a said service at Callander. Carol Services take place in the afternoon (Aberfoyle) and evening (Callander)

No morning service at Aberfoyle

Over the past two decades a revival of off-road pilgrimage travel to historic centres of Christian worship has been gathering momentum across Europe. Typified by the huge popularity of the camino to Santiago de Compostella in northern Spain, this can also now be seen across Scandinavia and in many other places. Here in Scotland we are recognising that the banning of all forms of pilgrimage following the Reformation of 1560, and its suppression for centuries thereafter, has hidden a much older tradition centred on Whithorn, Iona, St Andrews, Tain and many more shrines which once gave Scotland such a prominent place on the religious map of Europe. Today, new life is being breathed into this rich 1,500 year old heritage.

The Scottish Pilgrim Routes Forum, established in 2012 following earlier exploratory work by ACTS Scottish Churches Rural Group, is not a religious body as such but seeks to bring together organisations and individuals in a national network to develop off-road pilgrimage travel. In establishing designated, themed walking routes linking Scotland’s historic pilgrimage centres, we recognise that the end result should bring significant economic, social and environmental benefits to local communities as well as foster a spiritual dimension of journeying in the great outdoors for the individual. Anyone can be a pilgrim.

Scotland’s Churches Trust has been a Forum member since the outset, and the Scotland’s Pilgrim Journeys project offers real scope to encourage SCT member churches to become active partners in shaping the development of new Pilgrim Way walking routes. Currently, SPRF member organisations are actively promoting at least four such routes across Scotland and playing a key role in their steering groups, so here are important seeds for partnership.

Crucially, individual churches are already heavily involved in the Forum’s work. In 2013, the congregation of Paisley Abbey celebrated the 850th anniversary of the church’s original foundation as a Cluniac monastery with a series of pilgrimage walks to Whithorn, which has now resulted in the creation of the Whithorn Way long distance route, linking Glasgow Cathedral in the north with the Isle of Whithorn in the south. This year, ACTS has supported a new programme group to encourage ecumenical church input to the future operation of the Fife Pilgrim Way walking route linking Culross, Dunfermline and St Andrews. Elsewhere, local churches in the Borders, on the island of Arran, and on Shapinsay, Orkney are planning to cater for pilgrim visitors, and on the Cowal peninsula a new Church of Scotland initiative has begun to promote ‘faith tourism’ in the area, using local resources to attract visitors to churches and early Christian sites. In Aberdeenshire, mid Perthshire and East Lothian, local networks set up with SPRF input are planning and promoting future Pilgrim Way walking routes with the same aim. 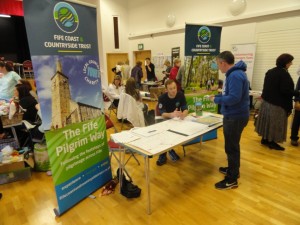 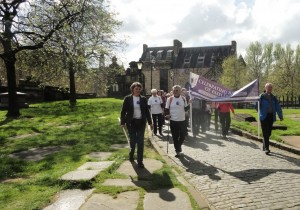 SPRF recognises that this is a movement that is only just beginning, and there is much work still to do to raise public awareness. We warmly welcome representatives of any SCT member church at our third annual Scottish Pilgrimage Gathering, to be held in Melrose on 2nd October when we will be focusing on the pilgrimage heritage of St Cuthbert and its legacy today; the programme includes an interpreted walk linked to the Pilgrim Way that bears his name.

For full information on SPG 2015, and on any other aspects of the Forum’s work, please visit www.sprf.org.uk

Please note that there is no Fellowship Group on Tuesday of this week due to weather concerns nor a Midweek Service at Callander.

O Lord Jesus Christ,
who at your first coming sent your messenger
to prepare your way before you:
grant that the ministers and stewards of your mysteries
may likewise so prepare and make ready your way
by turning the hearts of the disobedient to the wisdom of the just,
that at your second coming to judge the world
we may be found an acceptable people in your sight;
for you are alive and reign with the Father
in the unity of the Holy Spirit,
one God, now and for ever.

Commencing at 3.00pm there will be An Afternoon of Advent Music and Readings.  Friends of Perth Cathedral Music (FPCM) are pleased to welcome back the Kirriemuir-based ensemble The STRATHMORE SINGERS in a concert of Advent Music and Readings at Perth Cathedral St Ninian’s, North Methven Street, Perth.  Music will include pieces by Palestrina, James MacMillan, Thomas Tallis, and more.  Tickets available at the door on the day – £10, £8 Concessions, £5 FPCM Members.

Main Christmas Services in the Linkage

The tree has been a landmark at St Andrew’s for as long as the church has existed on the site possibly longer. Proposals of Marriage have been made beneath its canopy except sadly over the past three years this has contained progressively less foliage. Kindly passers-by have for some time been warning us of the tree’s decline. In view of this, specialist advice has been sought in view, of Health and Safety implications and the duty of the Vestry to be vigilant. The advice sadly confirms that the tree is now all but dead. We now have little alternative but to seek a second opinion from the National Park Tree Preservation Officer and at the same time submit an application for eventual removal.

O Lord, raise up we pray thee thy power
and come among us,
and with great might succour us;
that whereas, through our sins and wickedness
we are sore let and hindered
in running the race that is set before us,
thy bountiful grace and mercy
may speedily help and deliver us;
through the satisfaction of thy Son our Lord,
to whom with thee and the Holy Spirit
be honour and glory, now and for ever.

Followed by the Annual Parish Meeting

Commencing at 3.00pm there will be An Afternoon of Advent Music and Readings.  Friends of Perth Cathedral Music (FPCM) are pleased to welcome back the Kirriemuir-based ensemble The STRATHMORE SINGERS in a concert of Advent Music and Readings at Perth Cathedral St Ninian’s, North Methven Street, Perth.  Music will include pieces by Palestrina, James MacMillan, Thomas Tallis, and more.  Tickets available at the door on the day – £10, £8 Concessions, £5 FPCM Members.

Main Christmas Services in the Linkage