To subscribe to our Concert/Events email alert, please complete and submit the form below.

We shall send you an email with our next event when this is scheduled.

This form is to subscribe to our Concert Promotional emails

We are delighted to welcome multi talented musician, Calum Robertson, back to Aberfoyle. He is coming with soprano, Sally Carr, trumpeter, Christopher Roberts and drummer, Thomas Lowe. 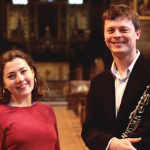 They are all successful young musicians, educated in Scotland and recipients of prestigious prizes and awards.

They will be playing a very interesting and varied programme including music by Boyce, Handel and Burgon…… a concert not to be missed!

St Mary’ swas delighted to welcome back Lee Holland to Aberfoyle with Glynn Forrest. Together they form The Atholl Duo. Both are successful performers in their own right and passionate about promoting and playing chamber music. The players met 10 years ago while studying at the Royal Conservatoire of Scotland and have been pursuing varied freelance careers ever since. 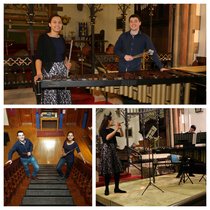 Glynn has enjoyed involvement in projects with Glasgow New Music Expedition, Rednote Ensemble, the Pavel Haas Quartet, and Auricle ensemble. He has also performed as a soloist in many situations, including a performance of Rory Boyle’s marimba concerto with the BBC Scottish Symphony Orchestra and a joint marimba recital with Calum Huggan as part of Glasgow University’s lunchtime series.

Pure Brass is a vibrant, young and well established brass quintet that perform regularly to critical acclaim. Formed in 2006 at the Royal Conseratoire of Scotland the group has quickly become a prominent ensemble within the Scottish chamber music scene. 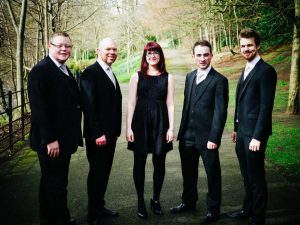 The quintet has performed in solo recitals in some of the leading venues in the UK including; St Martin in the Fields London, the Usher Hall Edinburgh, Glasgow Royal Concert Hall and at festivals such as the Edinburgh Fringe, Durham Festival of Brass, and the Sauerland-Herbst, Germany and T in The Park!

A lovely afternoon concert from Sax Ecosse showcasing the rich, warm sound of the saxophone with arrangements of Bach and Grieg and then music written for the saxophone from the mid 19th century to the present day. All finished off with an encore of a foot stamping Hangarian Dance.

This year’s group was the best we have heard; and the Feis have been visiting St Marys’ now for a number of years.  The group consisted of 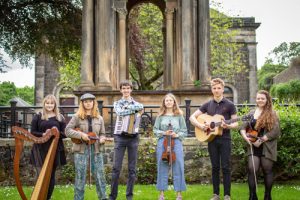 What a wonderful concert we were treated to this afternoon. David Hamilton spoke very eloquently about the stops on the organ and demonstrated the variety of sounds that could be created. We then travelled round some of the great organists and composers of Europe starting with Cesar Franck, some complex Bach, a little Vierne and finishing with glorious Mendelssohn.

Beethoven Op 18 no. 6 in B flat
Rachmaninov: “Romance” from String Quartet no.1
Scandinavian Folk Tunes: ”Woodworks” 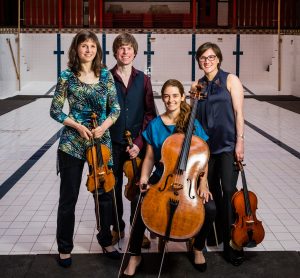 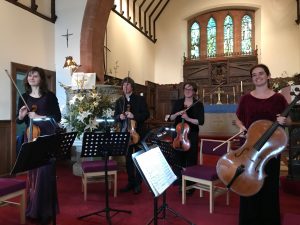 Our Reviewer said ; ‘A thoroughly enjoyable afternoon concert from the Kentigern String Quartet. What an absolute treat to welcome musicians of this calibre to St Mary’s, Aberfoyle with their lovely and varied programme from the entertaining McEwen Biscay Quartet, via some dazzling Beethoven and lyrical Rachmaninov to finish with some Scandinavian Folk.’ 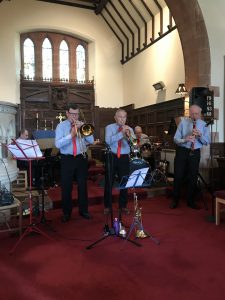 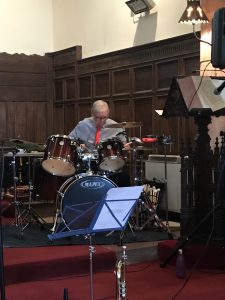 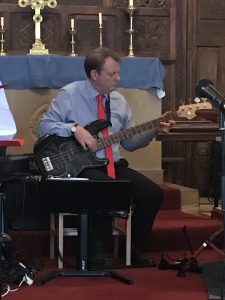 Our Reviewer said; What an amazing variety of music from Ines Zimmermann (recorder and flute) and Kevin Duggan (Organ) at this afternoon’s concert.   From the beautiful opening piece: “Andante Religioso” by Hans Hiller to the virtuosic Telemann Sonata in C major at the end the whole concert was an absolute treat. 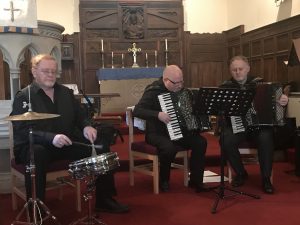 We were treated to virtuosic accordion playing from John and George Burns this afternoon at St Mary’s. The Burns brothers, along with Fergus Wood on drums, comprise the group, Les Trois Blondes and they played a lively mix of Bal Musette, French cafe music, and some beautiful Gaelic waltzes. The whole concert was ably compered by Fergus who set the music in context with interesting information and anecdotes.

“it was a pleasure to welcome back the St. Petersburg Resurrection
Choir under their conductor, Jurij Maruk. This popular and well-
attended concert was hugely enjoyed by the audience. Delivered with
their customary humour, the varied programme of sacred and folk music
showcased each member of the choir, and especially Anatoniliy
Artamonov, their basso profundo singer. We look forward to their
return.”

Lee Holland, Flute • Rachel Spencer, Violin • Feargus Egan, Cello. The Monzani Trio is an exciting new partnership between three good friends, all successful performers in their own right, who have a passion for chamber music and an interest in exploring the diverse repertoire for flute, violin and cello. 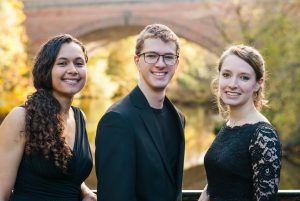 They gave us a virtuoso performance of some wonderful music, largely based on Folk music through the ages.  It was good to hear Eddie McGuires compositions.  He is a regular performer at St Mary’s together with Alastair Savage

Alastair and his friends are now regular annual visitors to St Mary’s.  This year Alastair brought Euan Drysdale and Iain Crawford, who form the regular Scottish Fiddle trio.  All of them are wonderful musicians; and Alastair’s own compositions show off his own unique talents as a composer.  He writes some wonderful, evocative and memorable tunes and melodies.

As always the trio played a mix of Scottish fiddle music from all ages, featuring such well known names as Niel Gow and James Scott Skinner. 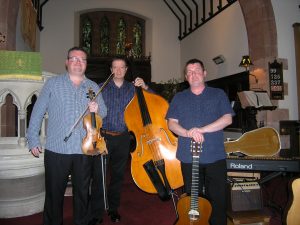 But it was Alastair’s own compositions, this year, which were very much to the fore.  We particularly enjoyed the piece that they played as an encore; A Vanishing Way Of Life,  from Secrets From The Kitty

The trio have said that would like to come back to St Mary’s; we do hope so !

Many thanks to Alastair, Iain and Euan. See you next Year.

We were thrilled to have two superb musicians visit St Mary’s on 19th August. A rally good sized and very appreciative audience enjoyed a wonderful programme of Baroque music 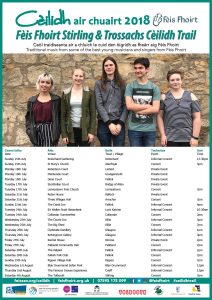 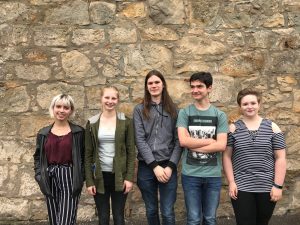 The Cèilidh Trail is a platform for visitors to Scotland to experience traditional Scottish music in a wide variety of settings. Running over the peak July/August tourist season, the musicians entertain in a range of venues including Folk Clubs, festivals, village halls and tourist attractions throughout central Scotland.

Another really interesting organ recital – this time given by Chris Nickol from New Kilpatrick Paris Church.  In a wide ranging programme and full programme, Chris played the music of many composers including perennial favourites, Bach, Elgar and Maxwell-Davies. Chris’ skilful playing showed the organ off to its full advantage. 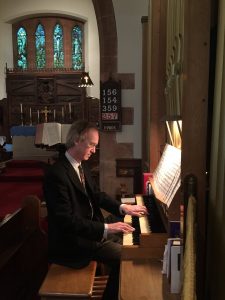 Christopher Nickol was born in Cambridge and gained an organ scholarship to the college chapel of Royal Holloway College (University of London). He is currently the organist and Music Director at New Kilpatrick Parish Church. He has a diverse career outwith the Kirk as a teacher, recitalist, conductor and accompanist.  He has performed with many of Scotland’s major choirs and orchestras, and plays frequently at Glasgow’s Kelvingrove Art Gallery. His repertoire includes an imaginative mix of contemporary pop culture pieces with the classics. He has given recitals throughout the UK and overseas, broadcast on BBC Radio and TV, and has recorded five CDs. 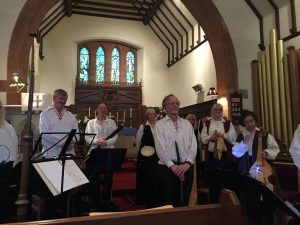 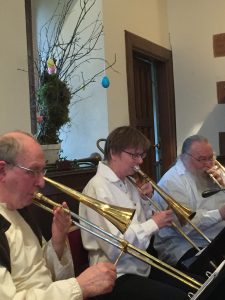 Gave us a wonderful and eclectic programme which was well received by a good sized audience.  we very much enjoyed having the Duo at St Mary’s, despite the very cold weather 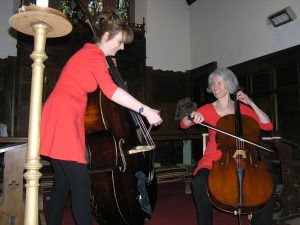 Lee Holland and Sasha Savaloni are a duo whose energised approach to flute and guitar repertoire engages and entertains audiences. 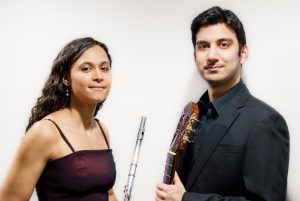 They gave a wonderful virtuoso performance to a very receptive audience on a very cold day.  How Lee played the virtuoso piece , Carmen Fantasie, is quite beyond me.  Fantastic.  And Sasha’s accompaniments throughout, modest though he is, are brilliant.  Thank you to both of them.

David Hamilton is University Organist at Strathclyde University, teaches at the Music School of Douglas Academy and at the Royal Conservatoire of Scotland. He has performed throughout Europe and in North America, Russia and China, and is a Guest Professor at Shanghai Conservatory. His recital at Aberfoyle on Sunday 21st January will explore the organ repertoire from the 17th to 21st centuries, with music from Bach, Widor an

“This concert was a gem. It was not so much a display of virtuosity – although there was that – as an exposition on organ construction, and the relationship between Buxtehude and Bach, and Widor and Vierne, and their individual contributions to the evolution of organ music. To those who braved the snow, a really enjoyable experience.”

Even Older Concerts at St Mary’s

To subscribe to our Concert/Events email alert, please complete and submit the form below.

We shall send you an email with our next event when this is scheduled.

This form is to subscribe to our Concert Promotional emails