The Scottish Episcopal Church was the first reformed Church in Scotland and was established by King James V (reigned 1513-1542, father of Mary Queen of Scots). Bishops continued to govern the Church in Scotland, and it was later, during the constitutional crisis of 1688/9 that the Presbyterian Kirk finally became the established Church of Scotland. In Victorian times the Scottish Episcopal Church began to flourish again and is proud of its antiquity and unbroken apostolic succession. The Church is in full communion with the Church of England and worldwide Anglican Church.

The Linked Parishes of St Andrews and St Mary’s

St Andrew’s and St Mary’s are the most westerly parishes of Diocese of St Andrew’s, Dunkeld and Dunblane. The Cathedral Church is in Perth and diocesan Bishop is the Rt. Revd. Ian Paton . The Revd. Canon Richard Grosse is Rector of both parishes

St Andrew’s Church, Callander was built by the resident stone mason of Stronvar, Balquhidder, and consecrated by Bishop Wordsworth in 1857. It was raised to the status of an “incumbency” in 1871.

St Mary’s, Aberfoyle was built in 1892-1893 and consecrated in 1893. Its first congregation included many of the quarry workers who had come from Ballachulish, a staunchly episcopalian area of Argyll, who had settled in Aberfoyle to work in quarries here. 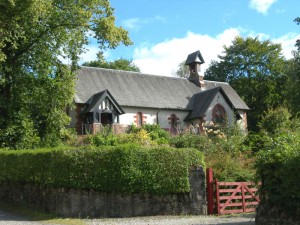 The Diocesan Synod is responsible for overseeing the administration of the Diocese, through its appointed officers. Representatives of both churches attend both the Diocesan Synod and the General Synod, the governing body of the Scottish Episcopal Church, led by the Bishops. The congregations elect and appoint members to serve on the two Vestries, which are responsible for conducting the day-to-day administration of each Church and parish.

The churches receive some diocesan support, but are largely self-funding and have to provide an annual quota sum to Diocesan funds.  Certain aspects of joint funding are conducted. Repairs and maintenance to the Church building and rectory is the responsibility of the congregation and all running costs of the parishes. From time to time volunteers are forthcoming for practical maintenance tasks with regard to the Churches and surroundings.

In 1765 a narrow bed of good quality clay slate was discovered in Aberfoyle entering the parish just behind Couligarten and leaving it at Brig of Turk. The slates were strong and durable, with a range of blue, purple and green colours. Over the years, production at the Aberfoyle quarry increased, and in about 1850, workers were recruited from Ballachulish and the Western Isles. A quarry village complete with church and school was built above Aberfoyle, adjacent to what is now called the Trossachs Road, to house these workers and their families. The village housed about eighty people, but only one house remains today. In 1900 the quarry was the third largest in Scotland producing 1.4 million slates.

Most of the quarry workers from the North and West were devout Episcopalians, and they wished to build a church in Aberfoyle as the quarry village church was too small. The Duke of Montrose gave them a plot near Lime Craig above the east end of the village.

The quarrymen started work on their new church in 1892, using their spare time for no pay. The building stone for the church was acquired at very little cost, thanks to Hugh Kennedy, an entrepreneur who used stone, sourced from Ailsa Craig, to test the weight capacity of the new railway line built across Gartmore Moss.

Additional assistance was probably given by local people; we know that Richard Joynson gave £500 towards the project.

The work on the church, named St. Mary’s, was completed in 1893, and the first priest in charge was Reverend Henry Lawrence Williamson.

Adapted from an article by Peter Joynson

More on the Quarrymen of Aberfoyle